★ A Moment of Clarity Regarding the Raison d’Être for the App Store by John Gruber
Thursday July 9th, 2020 at 7:15 PM

Feel free to file Google’s release this week of an update to their iPad Gmail app with support for split-screen multitasking under “better late than never”, but this is so late it borders on the absurd. Split-screen multitasking was introduced for the iPad back in 2015 with iOS 9. Five years to add support for a foundational element of the iPad user experience. And an email client is near the top of the list of the type of apps where someone would want to use split-screen. Five years.

Google makes a lot of software with terrible user experiences for users who have poor taste. Their iOS software, in particular, has never suggested that it was designed by people who like — or even use — iOS. It’s the blind leading the blind. But yet the Gmail app is currently the number one free app in the Productivity category in the App Store.

On the surface, we can blow it off. To each their own. Whatever floats their boat. Who cares if millions of iPad users are satisfied using an email client that is a poor iPad app, so long as actual good iPad email clients are available to those who do care?

I worry that it’s not tenable in the long run to expect Apple to continue striving to create well-crafted — let alone insanely great — software when a clear majority of its customers not only settle for, but perhaps even prefer, software that is, to put it kindly, garbage. There have always been popular Mac and iPhone apps that are objectively terrible apps — where by “popular” I mean much-used, not much-loved. But what made Apple users Apple users is that they complained vociferously if they had to use a terrible app. Word 6[w] was a sack of dog shit Microsoft dropped off and set aflame on Mac users’ porch, but we all knew it was a flaming bag of dog shit, and even those of us who didn’t even use Word were angry about it because it was an insult.

I worry that this sort of “Who cares, it’s better than nothing” attitude has seeped into Apple itself, and explains how we wound up with barely modified iPad apps shipping as system apps on the Mac.

But more than anything I worry that this exemplifies where Apple has lost its way with the App Store. What exactly is the point of running a strict approval process for apps if not, first and foremost, to ensure that they’re good apps? An iPad email app that doesn’t support split-screen multitasking for five years is, by definition, not a good app.

I’d like to see all the vim, vigor, and vigilance Apple applies to making sure no app on the App Store is making a dime without Apple getting three cents applied instead to making sure there aren’t any scams or ripoffs, and that popular apps support good-citizen-of-the-platform features within a reasonable amount of time after those features are introduced in the OS. I don’t know exactly how long “reasonable” is, but five fucking years for split-screen support ain’t it.

You might argue that there are a million apps in the App Store and Apple can’t make sure every one of them is up to snuff quality-wise. But there’s no need to scrutinize a million apps — just start with the apps with a million users. The more popular an app is the more Apple should scrutinize it in terms of being, simply, a decent citizen of the platform. If they’re going to be stringent about App Store review, they should be stringent in the name of user experience.

That the iPad’s most-installed productivity app was allowed to languish for half a decade without supporting something as fundamental to the platform as split-screen is every bit as much a condemnation of the state of the App Store as the Hey imbroglio was. It’s the other side of the same coin.

The primary purpose of the App Store should be to steer third-party apps toward excellence, to make the platform as a whole as insanely great as possible. [When Steve Jobs introduced the App Store in 2008][sj], he said, “We don’t intend to make any money off the App Store. We’re basically giving all the money to the developers and the 30 percent that pays for running the store, that’ll be great.” It’s impossible to square that mindset with the App Store of today, where the highest priority1 seemingly is the generation of ever-increasing revenue in the Services column of Apple’s quarterly finance spreadsheet.

Apple undeniably wields great power from the fact that the App Store is the exclusive source for all consumer software for the iPhone and iPad. Why not use that power in the name of user experience? Imagine a world where the biggest fear developers had when submitting an app for review wasn’t whether they were offering Apple a sufficient cut of their revenue, but whether they were offering users a good enough native-to-the-platform experience. Video app that doesn’t support picture-in-picture? You’re out of the store. App doesn’t support dynamic type size but clearly should? You’re out. Poor accessibility support? Out. Popular email client that doesn’t support split screen? Out.

Great products often (but, sadly, not always) generate profit. Successfully navigating this dynamic — earning profits as a natural byproduct of the creation of consistently great products that people want to buy — is the story of Apple’s entire 40-year history in a nutshell. But profit seeking, as an end unto itself, does not generate excellence — and in fact generally results in the opposite. Apple, like any great company, is rightfully driven by an insatiable appetite, but that appetite ought to be for adding ever more artistic and technical excellence to the world, not mining ever more money from it.

You can’t pack every last ounce of joy, beauty, and elegance into something while simultaneously trying to squeeze every last dollar out of it.

gglockner
reply
Really? I thought Apple's sole moderation job was to ensure the App Store was free of malware, scams and fraud - they weren't filtering apps based on opinion.
Bellevue, WA

zippy72
reply
"Google makes a lot of software with terrible user experiences for users who have poor taste."

Canon and Sony News, Deals, and What's New at The-Digital-Picture.com 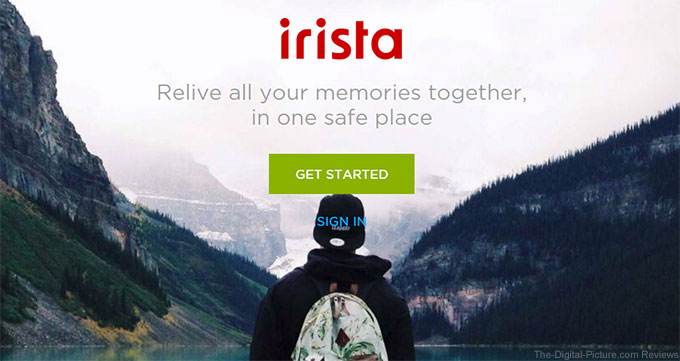 We want to thank you for using Irista over the years and hope that you've enjoyed its services.

Hopefully by now you've downloaded your photos and videos, but if not, you can do so here until the end of the day.

Creating an OLED screen that can fold and refold hundreds of thousands of times involved technical challenges that boggle the mind. But the question remains: Why is Samsung selling a device that it knows is still so delicate, instead of waiting until it’s worked out how to make it strong? (This isn’t just a Samsung problem; Apple recently introduced a white titanium credit card you can’t keep near leather or denim.)

I’d file this under “False Equivalence”, but Apple brought it upon themselves with that support page for Apple Card care. To be clear, though, Apple never said you “can’t” or even “shouldn’t” keep Apple Card in a leather wallet or denim pockets. All they said is that if you do, the card might pick up stains. As I wrote, Apple’s Apple Card care instructions are for people who obsessively want to keep their card in mint condition — which is not most people. (I’ve had mine in the outside sleeve of a leather wallet for a month now, and it looks like new, and I honestly don’t care if it picks up scratches or stains.)

But Apple’s support document, as written, is easily misinterpreted as suggesting Apple Card is delicate and fragile. And so here we are with The Washington Post’s tech columnist putting it in the same boat as a $2,000 phone from Samsung that you’re warned not to put in the same pocket with loose change or touch the screen with your fingernails.

gglockner
reply
Waiting for Gruber to call Fowler a jackass, which would be deserved (not just for this review).
Bellevue, WA

Just a few years ago, Microsoft was seen as a lumbering has-been of the technology world.

It was big and still quite profitable, but the company had lost its luster, failing or trailing in the markets of the future like mobile, search, online advertising and cloud computing. Its stock price languished, inching up 3 percent in the decade through the end of 2012.

It’s a very different story today. Microsoft is running neck and neck with Apple for the title of the world’s most valuable company, both worth more than $850 billion, thanks to a stock price that has climbed 30 percent over the last 12 months.

Interesting analysis. In a nutshell, this is a combination of Satya Nadella’s vision when he came on board in 2014 (dump the old stuff that wasn’t working, hyper focus on the new, like cloud computing) and Apple’s iPhone-sales-centric valuation.

Lots of detail on the re-invention of Microsoft. Terrific read. Wonder if Intel can find this path.

∞ Read this on The Loop David Gewirtz, in a ZDNet piece headlined “Maybe It’s Time for Apple to Spin Off the Mac as a Separate Company”:

All that brings us back to the idea of spinning out the Macintosh business. I know, I know. There are lots of structural reasons why this might not be possible for Apple. The company has merged development groups, macOS and iOS are growing ever closer, yada, yada, yada. Let’s set all that aside and just brainstorm the idea for a few minutes.

Ask yourself a few questions. Would a stand-alone company on the verge of market dominance ever let its flagship top-end machine languish for five years? What about its most versatile (the Mac mini)? Would it let that machine languish, without even a processor bump, for three years? Apple went two years without updating the iMac, and that’s a top-seller.

The answer to these questions is “of course not.” Think about the Apple of the past, the one fully-focused on the Mac. Would it have allowed Microsoft to gain such innovation ground with the Surface Studio and Surface Book products? Would it have gone years without even processor-bumping its models?

The whole notion of spinning off the Mac into a separate company is so dumb it isn’t worth addressing. But the last paragraph quoted above is. I’ve seen this argument made multiple times recently — that Microsoft’s innovative and deservedly well-regarded Surface lineup was only enabled by Apple taking its collective eye off the ball in the PC space. I don’t buy that at all.

There are two Macs that have languished in recent years: the Mac Pro and Mac Mini. Microsoft’s Surface lineup doesn’t have an entry in either of those categories. The Surface lineup is comprised of laptops and the iMac-esque Surface Studio.

Apple’s MacBook and iMac lineup lacks touchscreens not because Apple hasn’t paid attention to them but because Apple genuinely doesn’t think these machines should have touchscreens. Maybe Apple is wrong. Maybe Microsoft is onto the future of these form factors and Apple will have to play catch up. I don’t think so, but time will tell. But Apple has invested significant time and resources into the MacBook, MacBook Pro, iMac, and now iMac Pro as they are.

If Microsoft’s Surface lineup has taken advantage of complacency, it’s on the part of existing Windows PC makers, not Apple.

gglockner
reply
From everything I've heard, the desktop Surface computers are not selling, but the laptop ones are. Additionally, the laptop ones are poor as a tablet but quite good as a laptop. They seem to have some interest among road warriors, which is different than the personal/creative market for the iPad.
Bellevue, WA